Santa Dave and Mrs. Claus work as a team. Santa is warm and welcoming. He makes the toys. She runs everything at the North Pole! In addition to her organizational skills, the beautiful and charming Mrs. Claus can be very helpful and supportive when children are fearful and reluctant to approach the Big Guy!

Both Santa and Mrs. Claus are retired from their professions and are now having the times of their lives! When not at the North Pole, their vacation home is in Glastonbury, Connecticut.

Together, Santa and Mrs. Claus share sixty years of college textbook publishing experience. After serving as an assistant editor, editor, managing editor, general manager, and vice president of operations, Santa Dave (a.k.a. David Knutson) was president of two publishing companies. During this tenure, he enjoyed the privilege of working with some of the finest educational authors in the land, in a profession for which he had an enduring passion.

Helping to maintain his sanity and life balance during these times, he played guitar in rock and roll and country and western bands for twenty five years. Santa Dave recently enjoyed an encore career as a Special Education Paraprofessional in the Glastonbury CT school system. He has an education degree in English and Theatre from St. Cloud State College in Minnesota, where folks are said to be the “nicest” in the land.

Mrs. Marilyn Claus (a.k.a. Mary Gallagher) earned degrees in both English and Biology from Boston College and graduating from Wilcox College of Nursing, is also a Registered Nurse. While studying in England, she went on to earn a Masters Degree in Playwriting from Antioch College. She enjoyed a successful career in sales and sales management in college textbook publishing.

After earning a Masters in Nursing (MSN) from the University of Hartford, she transitioned to another management role as Supervisor of Assisted Living Services Agency (SALSA) in assisted living facilities.

Santa Dave is a member of the International Brotherhood of Real Bearded Santas (IBRBS). Santa Dave and Mrs. Claus and insured and have recent (and clear!) background checks.

Make your holiday special with Santa & Mrs. Claus at your event!

They can distribute your gifts, lead singalongs, read stories, and perform magic tricks while they mingle and interact with children and adults! 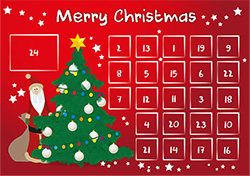